In Top Gear – shown here is the A4 pocketed folder, notepad, pocket event guide and delegate badge.
Pacesetters – there were over a hundred exhibitors at this event and as well as the signage for each of their booths (not shown) there were various bits of print to produce for the delegates including an A4 pocketed folder, notepad and 'Passport' which was a marketing device for delegates to tick off every booth they visited and perhaps win a prize.
Good2G0 – The fold up leaflet was based on a patented idea already in print. The screen-printed mirror card theme, used on the fronts and backs was also echoed on the postcard-sized invite and many other items (not shown here) such as A3 posters and a box containing a range of cosmetics that were also branded with the event logo. 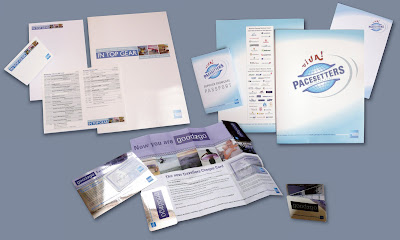 Click anywhere within an image to view at a larger size.
To view projects of a similar kind just click on the relevant labels underneath those articles. Also see Older Posts at the foot of the page where you'll find info on my past projects.
To go back to the Home page simply click anywhere within the header cards.

See my other sites